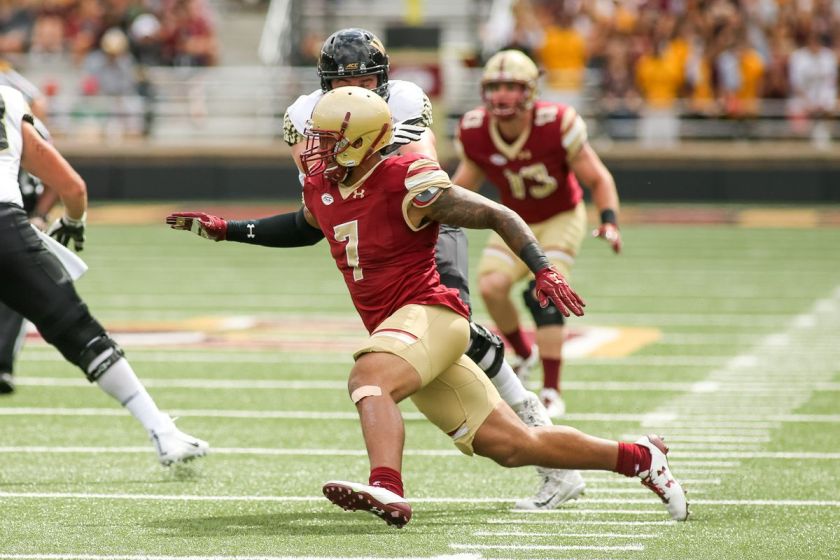 The draft is on its way as the first round begins tonight! Before the festivities, a lot of content from yours truly will be up to view. So get your draft reading in for the day before the bright lights shine at 8 PM ET/7 PM CT.

The edge class was an interesting group to follow throughout the year. Many believed that Landry, Chubb, and Arden Key were the cream of the crop. Key fell off due to off the field issues and injuries. However, other names emerged in what could be a deeper class with nice finds. Let’s get to the rankings.

Bradley Chubb is the clear number one edge player in the class. He plays with a motor that doesn’t stop, along with having a great arsenal of moves. Chubb uses his hands extremely well to get around the edge and to get linemen off of their anchor. Chubb also has great vision and works off what he sees linemen do at the snap.

Harold Landry had some injuries in 2017, but turn on the 2016 tape and you see why he’s a premier pass rusher. His explosive first step and bend around the edge is unmatched in the class. When you have that trait, teams take notice and you go early in the draft. He also extends his inside arm well to keep tackles off balance. He’s a round one lock.

Teams are lower on Josh Sweat because of his knee injury. From what it seems, Sweat is cleared with the knee injury. Sweat is a very athletic pass rusher with explosiveness off the snap to get around the edge. He also plays the run very well and can play on day one.

Duke Ejiofor may be the most calculated tactician in the edge rusher class. He is excellent with his hand usage to get around linemen and also comes ready with a plan on every snap. He isn’t the greatest athlete, but when you are that technical, you will find a place in the NFL.

Like Sweat, Kemoko Turay has an injury history that teams may avoid. However, when he’s on the field, he’s a top five edge rusher in the class. Turay uses his hands well to disengage blocks on the edge. He can be a pure pass rusher from day one, and he can develop into a three down defender.

Sam Hubbard is the ultimate question mark. He is a very athletic edge rusher, but players like that haven’t faired well in the league as of late. However, Hubbard can change that. He has a number of pass rush moves that he consistently brings to the table, and he has the high motor to constantly make linemen work.

Marcus Davenport has so much upside to him. He dominated his competition in college, often looking like an NFL player lost on a college field. His speed to power is very impressive, and that allows him to out-muscle his opponents and close quickly on the quarterback. He reminds me a lot of Jadeveon Clowney, lite version. He needs time to develop in the NFL though.

Obo Okoronkwo is a relentless pass rusher who had plenty of success at Oklahoma. He had good speed around the edge and solid hand usage, but he is often inconsistent on tape. If he can get off the snap quicker he’s going to be a steal in the middle rounds.

If you haven’t heard of Kylie Fitts, you will. Fitts looked very good at the Senior Bowl, showing some nice bend around the edge along with quickness to get around blocks. He will likely be a rotational pass rusher, but he will be a good one for some team.

When it comes to Lorenzo Carter, the potential is there. He is an excellent athlete who can run and chase. I’m just not sure how well he fits as an edge. He has the quickness to find the football against the run, but he’s extremely raw when it comes to rushing the passer. Teams may find moving him to a hybrid role will best fit his strengths.

Agree with the rankings? Don’t agree? Find @JSchyvinck13 on Twitter to talk all things NFL Draft!

Also, be sure to go to @SportsGuysBlog on Twitter for Thursday and Friday coverage of the draft! The guys will be analyzing picks and answering your questions!